skip to main | skip to sidebar

Nation of Islam's Founder Was Afghani; Suffered from Diabetes 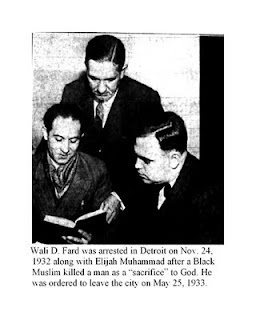 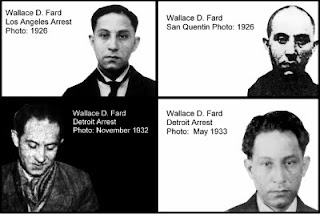 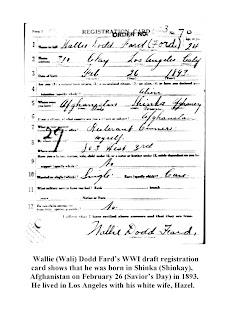 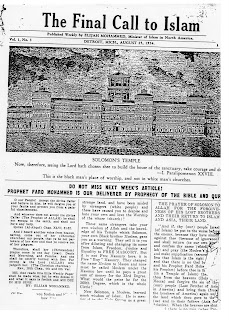 “When you believe in things you don’t understand, you suffer.”

From Superstitious, by Stevie Wonder

An old newspaper photograph and a World War I draft card prove conclusively that the FBI was correct about the true identity of the founder of the Nation of Islam (NOI).

Wallace D. Fard Muhammad – worshiped within the NOI and some offshoots as the literal incarnation of God – was in fact the same man known before the creation of the NOI as Wali Dodd Fard and Wallace Dodd Ford and before that, Fred Dodd.

Based on a World War I draft card on file at the National Archives (and available now on Ancestry.com and elsewhere), Fard gave his name as “Wallie Dodd Fard.” However, the clerk who registered him or another individual at the draft board put the name “Ford” in parenthesis, apparently thinking the spelling was in error or that Fard was mispronouncing his own name.

Fard had only been in America for four years at the time he registered for the First World War draft. The signature on the card is also “Wallie Dodd Fard.”

The FBI discovered from field interviews that Fard’s skills in reading and writing English were very poor. This was true of many immigrants during the early part of the twentieth century, of course.

The FBI's search for Fard’s true identity began in the late 1950s due to concerns about the skyrocketing growth of the NOI after Malcolm X became the sect’s national ambassador. Membership grew exponentially over a seven-year period beginning in 1956.

A former wife told FBI agents in the late 1950s that she routinely wrote letters for Fard. They were addressed to his uncle who lived in New Zealand.

Dated June 15, 1917, the draft card lists Fard’s place of birth as the Shinka region of Afghanistan. Shinka is misspelled. The town, actually spelled Shinkay, is located in Zabul Province.

In The Judas Factor (Thunder’s Mouth Press: 1992), I concluded (Chapter 10: Exposing Fard) that the FBI file on Wallace D. Fard contained credible information about the origins of the NOI founder. Despite the NOI’s belief that Fard was God incarnated, old editions of original Final Call newspaper describe him as “Prophet Fard Mohammed,” not Allah.

Orthodox Muslims condemn this as heresy. A prominent NOI member was threatened with death in the 1990s and given a warning to stop teaching that Fard was God in person. The orthodox group backed off over fears of a bloodbath between them and members of the Nation of Islam.

In The Messenger: The Rise and Fall of Elijah Muhammad (Pantheon: 1999) I speculated that Fard was from the Pakistan region because of the terminology he employed but also because of his surname.

Fard was a common surname among Pakistanis in the early 1900s.(Though not officially a state until 1947, the people retained their tribal identity and languages). The other telltale sign was Fard’s assertion that African Americans were originally members of the Tribe of Shabazz, and that they emanated from Mecca. Shabazz is an incorrect spelling of Shahbaz.

One of the holiest temples near Fard’s birthplace is Shahbaz Qalandar. It is named for Hazrat Lal Shahbaz Qalandar (1177–1274), the Sufi saint who was born in Marvand, Afghanistan.

Fard also renamed one of his first ministers – Elijah Muhammad’s brother – “Kallat Muhammad.” Qalat, as it happens, in the capital of Zabul Province. It borders Kandahar.

The Nation of Islam has long denied that Wallace Dodd Ford and Wali Dodd Fard were the same man. The draft card, interviews with his former wives, and a 1932 photograph in the Detroit Free Press prove beyond any doubt that my conclusions in The Messenger are correct.

The FBI started to unravel Fard’s hidden past when it interviewed one of his former wives. In January 1958, Hazel Evelsizer told the FBI that she formed a common law marriage with Wallace Dodd Ford in 1920. They had a son the same year whom they christened Wallace Dodd Ford Jr. He was killed on August 3, 1942 while serving in the US Coast Guard at Linhaven Roads, Virginia, according to his mother.

While placing clean clothing in her husband's dresser drawer one day, she found a letter addressed to “Fred Dodd” of Portland, Oregon. She found this odd because Ford told her that he lived in Portland prior to moving to Los Angeles. The couple lived in the home of a white family (the Bushings), according to the 1920 Census for Los Angeles County.

The FBI used this information to trace Ford back to Oregon. There, they found a divorce petition filed by Fred Dodd against Pearl (aka Pearle) Allen Dodd. The divorce petition, which is available from the Multnomah County archives, reveals that Dodd married the 18-year-old Native American in 1914. Her name appears on the marriage license and divorce petition as Pearle or Pearl Allen, but Native American census records show that her tribal surname was Enouf.

According to the petition, Dodd wanted a divorce after less than a year of marriage because his wife was a “habitual drinker.” Dodd, who neither drank nor smoked, operated a “lunch wagon” that brought in a hefty income. He was saving money to buy a home, but he accused his wife of wasting their savings on alcohol and travel.

Dodd’s occupation was significant since Wallace Dodd Ford operated a restaurant in Los Angeles. Moreover, Wallace D. Fard Muhammad impressed early members of the Nation of Islam with his culinary skills. Many NOI members said that the diet he recommended and his ban on pork and alcoholic beverages improved their health and even saved lives.

Few NOI members knew that Fard had other reasons besides religion to adhere to a strict diet. According to Nathaniel Muhammad, one of Elijah Muhammad’s sons, Fard was diabetic.

“He used to carry packs of sugar in his [suit coat] pocket,” the son told NOI historian Lance Shabazz during a phone interview. Nathaniel said he was working on a book that would reveal things he remembered from the two years that Fard was close to his family. He also mentioned that Fard’s hands bled easily, and that the NOI founder often wore gloves to confine its flow (go to Youtube and search for Episode 159 of the “Lance Shabazz Show”). Some types of diabetes result in a lack of sensation in the extremities (fingers, toes), resulting in undetected cuts and injuries.

Nathaniel Muhammad long ago rejected the claim of Fard’s divinity, he said, and gave his reasons.

He urged NOI members to give Fard credit for the work that he did, but to reject bogus claims that Fard was divine because Fard “never said he was a god.”

There are only four known photographs of Wali D. Fard Muhammad, the last name used by the NOI’s founder before leaving the group in 1934. His departure sparked a violent feud between Elijah Muhammad and his brother Kallat. According to limited records, Kallat wanted to continue teaching that Fard was a prophet. Elijah Muhammad, however, elevated Fard to the godhead and began calling himself the “seal of the prophets.” The feud, Elijah Muhammad wrote in several books, became so intense that he and his family had to hide from Kallat’s group for fear of being killed.

When Kallat fell ill in the late 1930s, Elijah Muhammad called it divine chastisement, proof that his brother was not the natural leader of the NOI.

The third photo is the Detroit Free Press picture of Fard in the custody of two detectives following the arrest of Robert Smith, a Black Muslim who killed an acquaintance as part of a plan to offer four “human sacrifices” to “my God.”

The fourth and last photo is also a mug shot. It was taken on May 25, 1933 by the Detroit Police Department. News had spread of other planned sacrificial murders, so prominent black residents of Detroit demanded that the city take action. Fard was given the option of leaving town or going to jail.

He returned to Hazel Dodd in Los Angeles. After a few weeks, Fard told her that he was returning to New Zealand. As far as anyone knows, he was never heard from again.

NOTE: A fuller description of the early years of the Nation of Islam will be offered in a book being published next year by a European scholar and teacher. She has provided the following information:

Race, Islam and the Quest for Freedom: A history of the Nation of Islam

Note: This column and accompanying materials may be copied and republished without prior consent from the author with the following caveats.

Even Steven
Karl Evanzz is the author of several books about the Nation of Islam, including The Judas Factor: The Plot to Kill Malcolm X (1992) and The Messenger: The Rise and Fall of Elijah Muhammad (1999). He was the ghostwriter for Mark Curry’s bestseller, Dancing with the Devil: How Puff Burned the Bad Boys of Hip Hop (2009), and author of The Wilma Chestnut Story (2011).